Referral marketing: What it is and how to use it successfully

How strategy frameworks can help your brand stay relevant

Metaverse dangers: How to protect brands from the dark side

How to define and share your core brand values effectively

Social media benchmarks by industry in 2023 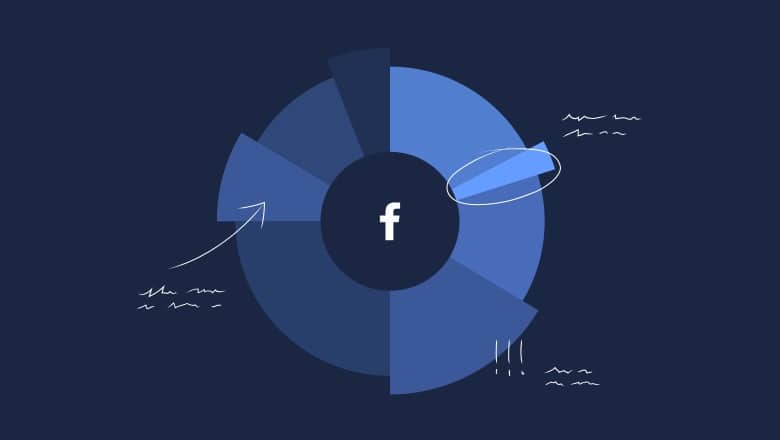 Trying to find up-to-date Facebook statistics? You came to the right place.

While we’re all familiar with Facebook and its advertising power, there are so many recent developments that marketers need to keep an eye on.

If you’re asking yourself these questions:

Facebook’s audience is diverse and anything but one-size-fits-all. To kick things off, let’s zero in on the most important social media demographics of Facebook users:

Despite the platform’s reputation as a seemingly “older” network, 26.4% of the platform’s user base is made up of millennials. That said, over one-third (36%) of Facebook’s audience are 45 or older.

2. 73% of college-educated Internet users are on Facebook, as are 70% of people earning more than $75k a year

Facebook’s highly educated and big-spending audience is notable for advertisers. This signals opportunities for brands looking to earn sales on high-ticket products.

But the latest Facebook stats signal that the platform is about as active as ever. That said, new competition and surprise growth from other social media platforms could ultimately halt its growth long-term.

Although adoption has certainly slowed down, there’s no denying the platform’s status as the market leader in social media. Facebook is on track to pass the 3 billion monthly user threshold, representing the first social network to do so.

4. 70% of Facebook users claim that they visit the site daily, with 49% checking the platform  “several times per day”

This data highlights how the platform earns repeat attention from users, beating out the likes of Instagram, Twitter and YouTube.  Perhaps a shock to critics, the concept of frantically checking Facebook throughout the day is alive and well.

You can analyze customers and their behavior on the platform by conducting a deep Facebook analysis and finding out where you stand with your audience based on the data you get.

5. The average Facebook user spends 33 minutes per day on the platform

Facebook usage has held steady since about 2019, although it has seen a 6-minute fall over the past five years total.

Keep in mind that social usage per platform is pretty much flat. More networks mean more fighting for audience attention. As a result, the average social consumer spreads their usage time around more evenly.

6. Facebook’s widespread mobile usage is staggering, with 98.5% of users accessing via mobile (and 81.8% doing so exclusively)

No surprises here: Social media and smartphones go hand in hand. That said, this data is noteworthy for crafting both Facebook posts and ads.

7. Two-thirds of adult users consume news through Facebook (and nearly one-third do so regularly)

Twitter might have the reputation of being the “breaking news” platform but Facebook remains a go-to source for news next to YouTube, according to the report below. This speaks to the importance of timely content that informs users, builds community and creates meaningful discussion.

This is definitely the most concerning of all our Facebook statistics for advertisers and marketers. Rapid growth on TikTok and slowdowns on Instagram show that younger audiences are moving the needle for social networks.

Food for thought: marketers have to remind themselves that Facebook is still a priority network for social-savvy brands looking to sell. According to this survey, marketers spend most of their efforts on Facebook compared to Instagram.

Fact: Facebook ads remain a staple of marketing regardless of user growth.

As social ads grow, organic reach gets harder to come by, meaning optimization and strategy are key to seeing meaningful returns.

10. Facebook accounts for over a quarter of all digital ad spending, right behind Google (28.9%) and surpassing Amazon (10.3%)

Social media is poised to surpass paid search if this confirms that Facebook is at the forefront of making it happen.

This Facebook stat speaks to Facebook’s wide audience reach, including its international ad-buying power for consumers outside of the US.

12. There are over 10 million active advertisers on Facebook as of 2020

Don’t let anyone tell you Facebook ads are dead. Between the revenue noted earlier and the fact that this number has been rising fairly consistently YoY, ads aren’t going anywhere yet.

Interest factoid from this report: while Instagram currently has a higher CPC than Facebook ($0.86 vs. $0.57), Instagram is also seeing better conversion rates than their parent company (8.07% vs. 6.57%).

14. Marketplace (2.7%) and in-stream video (1%) are among the most popular non-feed ad placements on Facebook.

Given how folks on Marketplace are eager to buy, ads fit right into their journey as customers. Still, this survey is disappointing for the future of Stories-based ads (0.4%).

The Facebook algorithm has been a source of irritation for many marketers. Thankfully, the platform itself has actually shed some light on what people are seeing and what helps increase reach.

From recommended content to ads and beyond, this data highlights just how much the average consumer’s attention span is being pulled.

Posts that take people off Facebook hurt their exposure. That’s why it’s important to use images, videos and anything else that keeps people on the platform.

Brands looking to grow on Facebook have an uphill battle if they’re relying on organic content alone, however, data shows that engagement is high on Facebook compared to Twitter. Making use of engagement-worthy posts like employee advocacy content, polls or contests will make sure you reel in the benefit of this stat.

To wrap things up, we’ll review some Facebook stats that break down some of the platform’s key features.

18. Facebook video (in-feed) is the most popular type of video content on the platform (51% of users), slightly less than Live and Watch combined (57%).

Live and Watch are growing, but they don’t reach the engagement that traditional Facebook video receives.

19. Facebook Messenger is on track to surpass 3.2 billion mobile users by the end of 2022

When we talk about Facebook, Messenger is often forgotten, but it’s integral to the platform and represents the app’s most-used feature according to this report from Statista.

20. Over 1 billion people use Stories across Facebook’s family of apps (including Instagram)

Finally, Facebook Stories followed Instagram and became one of the platform’s most popular features, according to the social media giant.

Now more than ever, it’s time to put your Facebook presence under the microscope.

No matter what you’re doing on Facebook, there’s no denying it’s a priority platform with a big base and tons of potential. Engagement through ads, organic posts, and everything in-between is extremely valuable.

We hope these Facebook stats can help guide your strategy in the right direction. With these takeaways and a better understanding of your priority Facebook metrics, you’ll be closer to scoring the reach your brand deserves.

How to Reach More People on Twitter: What the Latest Research Shows