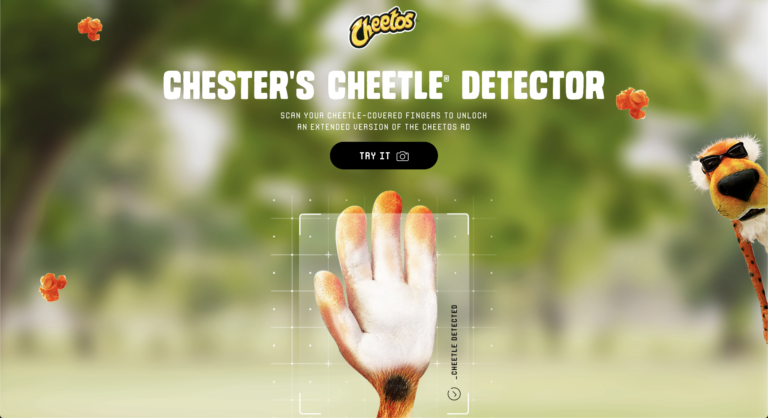 Ran Craycraft is the co-founder and managing partner at Wildebeest, a California-based hands-on digital agency helping creative brands innovate and grow. In the late months of 2019 his agency was approached by Frito-Lay to design an innovative Super Bowl experience for Cheetos, the crunchy orange corn puff snack.

“They wanted a concept that gave exclusive access to people who purchased Cheetos for their Super Bowl parties,” Ran explained.

The challenge was how to do that without sending people rummaging through trash bins for barcodes on discarded bags, how to make it highly engaging and fun, and most importantly, how to do it all in under 30 days.

We sat down with Ran to discuss how Wildebeest made ‘Cheetle’ dust detectable by smartphones using augmented reality and ultimately being a part of the MC Hammer, Can’t Touch This campaign that won one of the most prestigious awards in advertising.

Despite an incredibly short timeframe to produce the product, Wildebeest felt confident going into this last-minute computer vision work as they had many times before.

“We based the level of effort required on our experience with Kelley Blue Book and Autotrader,” Ran said. “A previous project used augmented reality to scan the exterior of vehicles looking for body damage. If it detected any damage on the vehicle, it would assess how severe the damage was, where on the vehicle the damage occurred, and then if it could be repaired or replaced–ultimately landing on the actual value of that unique vehicle. But we had a very short turnaround for this Cheetos project, so we had to get to work.”

With a primary focus on rewarding people who bought Cheetos, Ran explained how they approached the project, discussing various directions they could have taken the work.

“What are the different avenues we could use to detect if someone had a bag of Cheetos? We thought we could ask them to scan the bag or a receipt. Maybe the user could scan a QR code on the bag? As we got deeper into the discovery phase, we realized that Cheetos at Super Bowl parties aren’t always still in the bag. They’re in a giant punchbowl and the bag, well, it’s in the trash.”

Not wanting to send people rifling through their trash to become involved in the campaign, the team at Wildebeest dug deeper and looked for a more clever approach.

The term ‘Cheetle’, recently announced from Frito-Lay at the time, is a way to describe the orange dust that remains on your hands after eating the snack. Wildebeest dove right in.

“We were talking a lot about the dust, the orange stuff that’s left on your fingers. We thought, ‘Well, hey, what if we just try to detect that?’ You have a much broader audience at that point and not just the party host who still had the receipt from buying the bag of Cheetos. Instead, we could reach anyone who’s a fan and engaging with the brand. Let’s reward them and create an opportunity for the campaign to reach even further.” 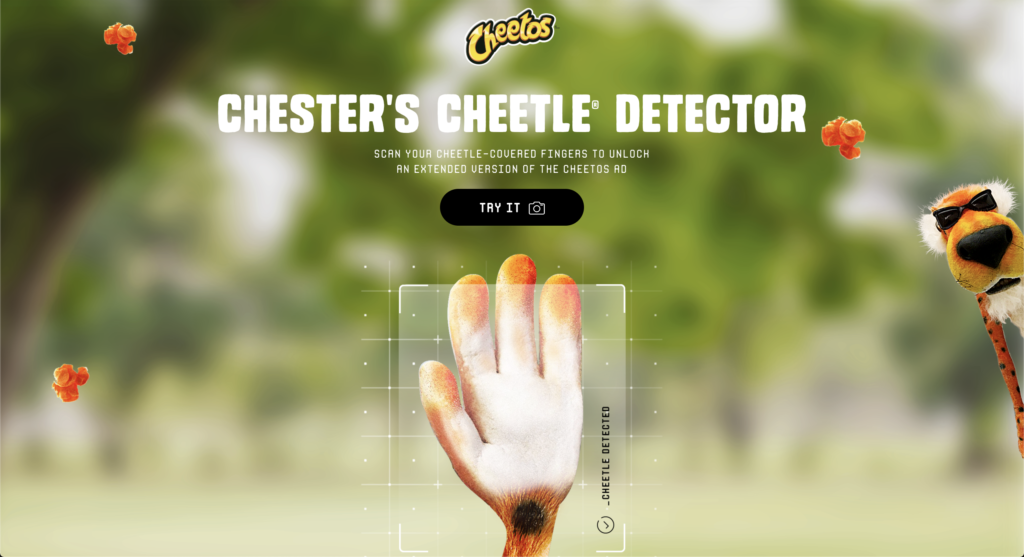 The team at Wildebeest had no idea how large, or small, the scale of their work would go. Ran said they “didn’t know how much money [the clients] were putting behind the media campaign, we didn’t know if it was going to be a single tweet on social media, or if it was going to be printed on the 50 yard line. We had no idea what to expect and no time to wait, so we built this technology to scale beyond our wildest expectations.”

Because of that huge unknown, the team wanted to keep third-party services that could potentially fail under a huge spike out of the experience.

Ran explained, “We didn’t want to build an app that required the user to download an additional plugin, or get into a situation where you have to use a certain phone. It was important for us to keep the user in mind and do everything we could to keep the experience as simplified as possible. So the strategy for us was to do our best to be inclusive and ensure as many users as possible could use this product.”

To ensure scalability, Wildebeest partnered up with Google, leveraging Google tools, the Google Cloud Platform, and TensorFlow to create a next-generation web app. For the user, “It was streamlined and just a matter of going to a website that didn’t require any downloads or anything. We built the whole experience for the browser and relatively low-speed connections.”

Partnering with Google for the project was a straightforward choice for Wildebeest as they’ve worked closely on many projects over the years.

“They (Google) were an original partner in the project. They were involved in a couple of ways. One, they have incredibly scalable cloud solutions that allowed this to flawlessly handle enormous spikes. When you need to scale for the Super Bowl, the Google Cloud Platform is a perfect place to start. In addition to powering the technology side of things, we integrated seamlessly with Google Ads to ensure the media campaign was efficient and targeted. Google tends to be involved from start to finish and that helps to ensure our campaigns are a success.”

In order to trial their creation and make sure it would work for all hands, regardless of size, skin color, or quality of photo, it required getting ‘Cheetle’ on a lot of fingers.

“I think that the biggest operational and logistical challenge for us was that we had to source a whole lot of Cheetos,” Ran said. “While we awaited the complimentary shipment of Cheetos from the client, we needed to get started, so we ended up buying every bag of the snack we could find at local grocery stores and shops,” Ran recalled, laughing. “We had like hundreds or maybe thousands of bags of Cheetos–it was floor to ceiling for a while.”

Not only did they need to get an endless supply of the product, but Wildebeest also needed people to eat them and test their detector. “We pulled friends and neighbors, people off the street, to say, ‘Hey, will you eat these Cheetos?’ That was pretty difficult. We had to find people that trusted us and were willing to eat the Cheetos and let us take pictures of their hands.”

They also had to account for different flavors of Cheetos, testing both Original and Flamin’ Hot. In order to recognize this significant color variation, the team at Wildebeest had to account for a spectrum of colors and textures in the Cheetle Detector.

And the leftovers? There were plenty. Wildebeest generously donated all of the remaining bags to Los Angeles-based food banks and charities. “We were able to give away every last bag of Cheetos that we had.”

At the very end stages of the product, one thing Ran and his team still needed to plan for were the various naughty gestures that someone might make with their hands when taking a photo with the ‘Cheetle’ dust before sharing to social media.

“The sharable photos our app generated included an overlay of the Cheetos logo. As you can imagine, we needed to account for a way to detect the gestures someone might make with their fingers before the Cheetos logo gets overlaid and it gets shared to social. Sure, anybody with Photoshop could make something obscene and share it on social media, but we don’t have to make it easy for them, you know? It was a rough day for HR at the office when we were capturing photos of the predictable obscene gestures someone might make with their hands…or body parts.”

Ultimately, they were able to tweak the product to detect the most commonly used obscene gestures and avert any issues when it came to launching the detector on one of entertainment’s biggest stages.

The ‘Cheetle’ detector became a huge success for both Wildebeest and Frito-Lay, despite the challenges and incredibly short time frame to create the technology.

“It would be easy to say that next time we want more time and more budget,” Ran said of his ideal project wish list. “But, you know, it kind of comes with the territory. If you want to do a project like this, for an event as big as the Super Bowl, it’s going to come with some concessions. In hindsight, I’m honestly not sure what we could have done differently. I think this is something that my team worked really hard on and we’re very proud of the outcome.”

And happy they should be. With any project of this size and complexity, there are various ways to measure success, including engagement (which there was plenty of), but industry recognition is incredibly valuable.

“The ‘Can’t Touch This’ campaign won the Grand Prix at Cannes Lions- the biggest award you can get in advertising that comes with some exceptional visibility. If an ad campaign wins, it’s a success, regardless of what other metrics you came in with.”

Looking ahead, Ran reflects most on the importance of strong trust in any client relationship. He says it was a key factor in the success of the Cheetle iD project, and continues to be a driving force in other projects Wildebeest undertakes.

“When a brand and an agency like and respect each other, and trust each other, you can do some pretty remarkable things. We made digital magic in record time and only because we had a client that trusted us, liked us, and gave us the resources and space we needed to operate. And those feelings were mutual so it was a great experience. When there’s any kind of hesitancy in an agency-client relationship, it’s very difficult to have positive outcomes like we saw in this campaign.”

Ultimately, this project helped to open doors for Wildebeest and offer them opportunities and confidence for countless new engagements. In the future, the company hopes to create long-term relationships with clients.

Ran said, “What I see for us in the future are deepening client engagements – retainers, becoming the digital agency of record – this gives us a chance to engage and understand our clients to help them continue to innovate and grow.”

More importantly, he says despite the tasting overload, he can still enjoy a bag of Cheetos from time to time!

Join the conversation with us on LinkedIn and Twitter.