Why Community Is The Last Great Marketing Strategy 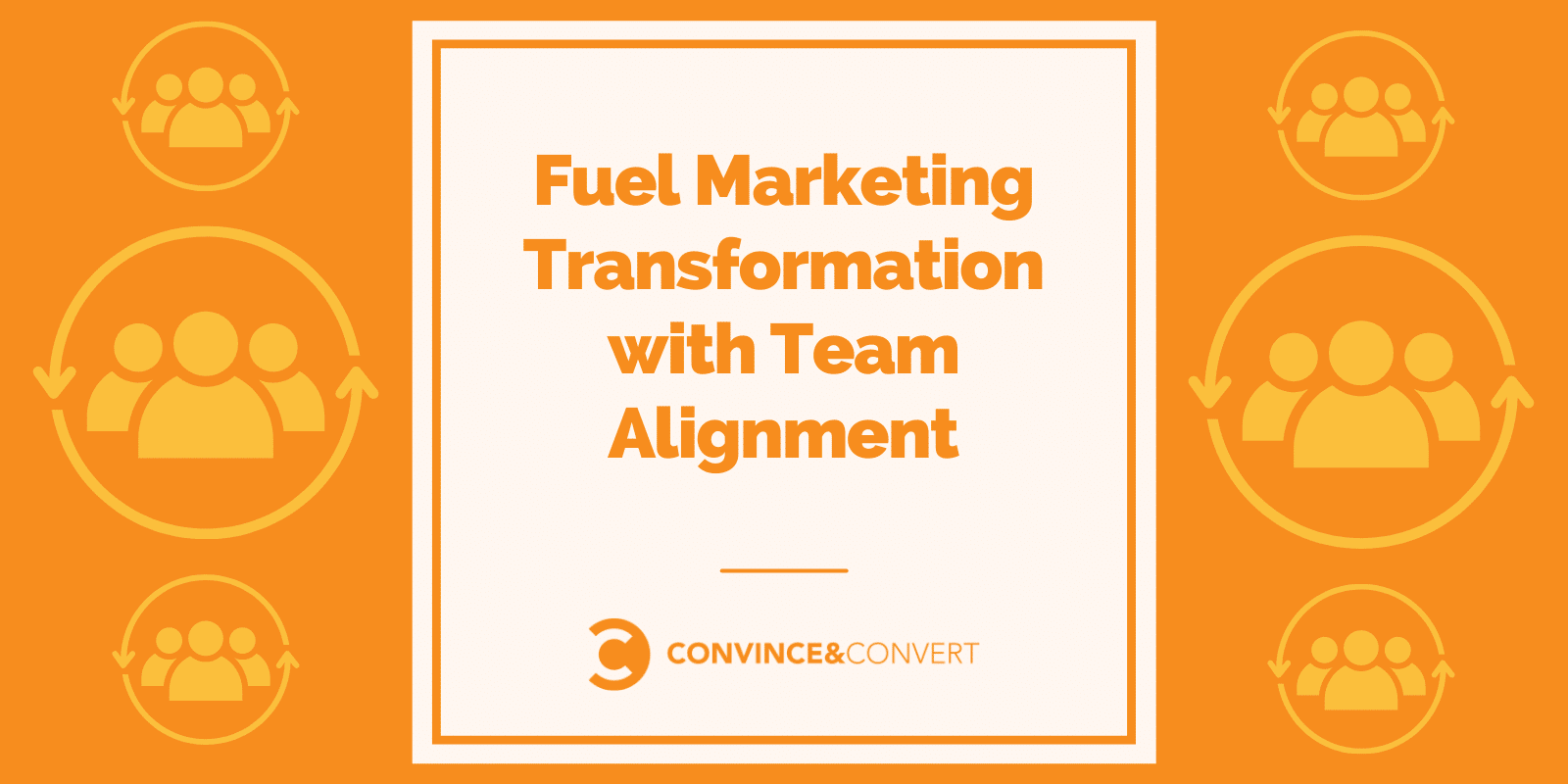 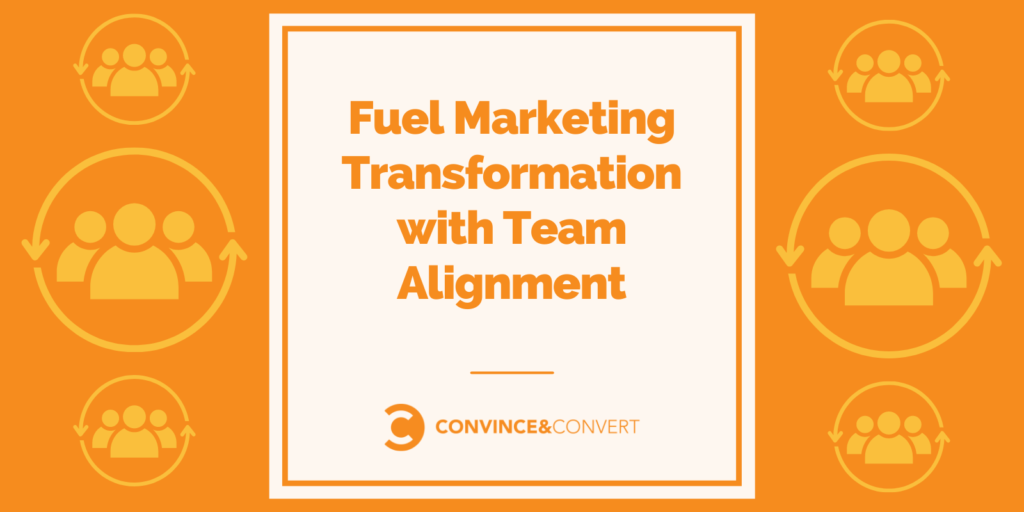 The Pain Points of Misaligned Teams

Anyone who’s worked on a team knows what it feels like to be part of a team that isn’t aligned, and this can have a real impact on your ability to make strategic improvements. Does this sound familiar?

I imagine you’re nodding your head and also feeling a growing apprehension about the big plans you have for the coming year.

For many of you, a new strategy, campaign, or initiative is on the horizon and success is the only acceptable outcome. You’ve likely tried implementing change in the past with less-than-ideal results. The issue is likely a mix of individual motivations, team culture, tools, and resource gaps that internal leaders are having difficulty parsing out and addressing.

But there is a better way: when team members actually trust their team, know how to point out flaws and learn from each other to co-create the strategy, inevitably objections and silos dissolve, enthusiasm skyrockets, and entrepreneurial thinking abounds.

Team Alignment is a Predictor of Success

This just in: Leading business researchers have discovered a revolutionary new approach that makes any business more profitable. It reduces costs and increases productivity and profitability. It increases lead quality, pipeline velocity, leads to happier customers, and more repeat business. Companies using this approach also have more satisfied employees, willing to work harder (often for less money!), and higher overall employee retention. It has no hard costs and you can do it internally, with resources you already have. Are you interested?

Any business leader would be negligent not to at least open that link and try to figure out if it was too good to be true. When they come to realize the research was conducted by Google, Harvard Business School and dozens of reputable sources consistently since the mid-1990’s you’d expect that they’d be adding this new approach to the very top of their to-do lists and retraining managers to incorporate the findings.

Team alignment, and it’s underlying foundation of psychological safety, is not something that should be relegated to HR or written off as “soft skills.” In almost two decades of writing and overseeing strategic marketing transformations, I can say with confidence that team alignment is the number one indicator of whether a new initiative will succeed or fail.

Unfortunately it’s also a topic many leaders would rather gloss over when they get ready for a big strategic change – they want action plans, not “warm and fuzzy” team alignment plans. I’ve had pushback more than once from clients who would prefer we “stay in our lane” and just focus on research, metrics, and action plans.

When you ask most business leaders about team alignment and psychological safety, they often point to the HR department, mumble something about culture, and shrug their shoulders. Which is too bad, because the research is clear:

Team alignment can feel hard to pin down if you’re new to the topic but here’s a simple definition: team alignment is the team’s ability to work together and learn from each other.

As researchers have tried to study and measure this trait, they have settled on the term “psychological safety” and defined it as having four key domains or areas that can be assessed:

Let me give you the shortcut formula to planning your success. Every single business transformation comes down to two simple questions:

The first item is your strategy, and companies are always paying for more and better strategies. Unfortunately, all too often they completely ignore the second item, assuming that once the WHAT and HOW are clear, the WHO will fall into place.

A plan can be strategically sound, backed by data, and make perfect sense on paper but that doesn’t mean the team will get on board. Considerations like who gets credit, who will benefit from less work or more resources, job security and perception of rank, and how success is measured all inherently affect the buy-in for any new plan.

STEP 1: Strategic Alignment – What exactly do we need to do differently?

It’s worth noting that most teams are pretty good at step one, but they stop there.

STEP 2: Stakeholder Analysis & Team Alignment – Who is going to do it?

Team Alignment In The Wild

For the last couple of years Convince & Convert has worked with a large national association ($1.7B in revenue, 38 million members) on a wide variety of marketing initiatives. One change in particular was in process when we started working together, and the outcome was anything but certain. A new project management system was intended to be a centralized place for updates and tracking, intended to increase collaboration, reduce meetings, and allow workloads to be distributed more evenly across the team.

Unfortunately, team adoption of the new tool was low and falling farther – the grumbling was increasing over time. Leaders in charge of its success were struggling to come up with a way forward. Confidential interviews with individual team members uncovered some real and specific challenges, both with the actual tool and how the change was communicated. Owners of the tool went back to developers to overhaul the tool and improve functionality, and are in the middle of a much more successful rollout with an enthusiastic reception from previously reluctant team members.

In another example, a nationally-recognized, top-50 university we worked with was struggling after some changes to the marketing team organizational chart and reporting structure. Two teams that had previously been independent were combined, but the merger was not a smooth one.

Assessments of the team showed that each smaller team felt psychologically safe to communicate openly. However, when the teams combined to collaborate, that index score went way down. The norms of each smaller team were different. They needed to be revisited to openly agree what type of feedback was preferred, how to run meetings, and a number of other patterns that develop almost without noticing but need to be identified, agreed upon and communicated to new team members. Once new norms were established, the teams were able to work together fluidly and begin finding the synergy that was intended with the original combining of teams.

It’s important to dig in here and get curious to understand team strengths, weaknesses, passions, and drains. This often means closed-door confidential sessions where team members have a safe space to talk about their ambitions and concerns, what skills they do or don’t possess and where they might like to grow. Effort is not the same for everyone; work to understand perceived effort with perspective taking, empathy, mentoring, coaching.

Smart leaders understand that all change in responsibilities comes with a power shift across a team. When changes are on the horizon, the first question everyone wants answered is, “how will this impact me and my job?”

Answering these questions in advance, equitably, and with your individual skills and goals in mind is the core job of a great manager. Allowing the team to negotiate among themselves, speaking honestly about their strengths and weaknesses, skills they have or want to develop, and how they’d like to see the change unfold is the gold standard.

How Does Your Team Rank?

These areas are so critical to navigating change, and more and more of our clients are interested in getting better, not just at the “what should we do to innovate?” question but also understanding the people and motivations that will make or break the strategic plans they’ve laid out.  A seven-question assessment that takes under 3 minutes can help teams understand their ability to bring new ideas and challenge each other, essential qualities of a successful organizational change process.

Benchmarking the team’s score and growth over time can provide tangible, actionable goals for managers and teams to work towards. The Convince & Convert team has strategists trained to conduct these assessments and facilitate improved team alignment, and we’d love to help your team on the next stage of your journey.

The Biggest Restaurant Industry Trends for 2022

Why Yesterday’s Consumer Insights Are No Longer Enough