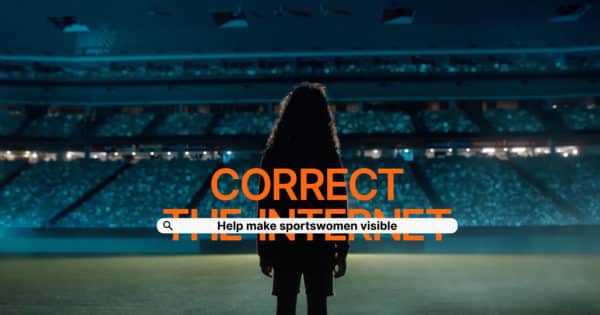 The internet is a wonderful tool for information, but any researcher can tell you that it isn’t always accurate. Checking facts is vital, but that goes double for women creators, scientists, athletes and more, whose accomplishments are often misattributed to male peers.

DDB New Zealand has launched its “Correct The Internet” spot to set the record straight for female athletes. This 60-second short was created by an international collective featuring members and supporters from across sports and marketing, joined by the common goal of correcting gender-biased search engine results.

The film opens on a young person standing in the middle of a sports stadium at night, shouting, “Hey, internet!” The empty seats light up as if powering on, and the youth asks what football player has scored the most goals internationally. An automated voice gives information that doesn’t add up, insisting that Cristiano Ronaldo scored the most goals at 118 goals despite admitting that Christine Sinclair scored 190. When this causes confusion, the stadium powers down again.

In the spirit of fairness

The aim of the initiative is to draw attention to these inaccuracies in hopes of making female athletes more visible simply by correctly identifying their achievements. Acknowledging that “correcting” search terms is no small feat, the goal is to inspire people globally to take action. This conversation has also fueled recent campaigns like Heineken’s “Cheers to All Fans,” which addressed pervasive gender bias in all things soccer, including how statistics for women players are reported.

To that end, the team behind the spot has created a tool that simplifies the process of providing feedback hosted on Correct The Internet’s website. The group hopes that, over time, this will enable many corrections across sports via support from the global community of supporters.

The fight to create a more equitable space for all genders in sports is ongoing and spans many different games, including everything from golf, basketball and beyond. This is supported by the organization’s research, indicating more than 30 major search engine inaccuracies and counting.