How To Make a YouTube Channel That’s Profitable Too

11 Hybrid Event Software Tools to Host Your Next Interactive Conference

The Chocolate Company That Sold One Million Bars In 20 Months

What Is DTC Ecommerce (+How to Sell DTC the Right Way)

You’ve got a great idea for a new product that’s not already made. Before asking a manufacturer to make it, you need a prototype—the first, unreleased version of your product.

Many entrepreneurs bypass the prototyping stage because they’re eager to sell and start making money from their invention. However, creating a prototype saves time and money in the long term. You’ll iron out any production issues, understand accurate costings, and rectify problems before your customers see your product first hand.

Unsure on how to create the first physical version of your product? This guide shares the prototype development process so you can start mass production confidently.

What is a prototype?

A prototype is an early, unreleased version of your product. Entrepreneurs make prototypes to see what the finished product would look like, resolve any incorrect or faulty functions, and gather feedback from their target market before investing in mass production.

There are two types of prototypes you can build:

According to Tim Ferriss, author of The 4-Hour Work Week, “You don’t always need both. You need to understand the purpose of your prototype. Is it for you to assess manufacturing? Is it to sell it back to clients? Is it to test it or sell it on Kickstarter? You need to know your objective and have that in mind first.”

Why do I need a prototype?

While prototyping can seem like an unnecessary delay, creating prototypes before the mass manufacturing process can save money in the long run. Here’s why.

How to get a prototype made

Intellectual property laws protect your inventions. Some suppliers are cutthroat—they can take your product idea and make it themselves if it’s not legally considered yours.

Protect yourself in the early stages of prototyping by protecting your product design. Enlist the help of an IP lawyer to trademark and patent-protect your design. You’ll need to file a provisional patent application, write documentation to prove you made the product, and have it signed and dated before the prototyping process begins.

Once your prototype design is protected, flesh out the product idea visually so you can see what does (or doesn’t) need to be included in your visual prototyping brief.

The easiest way to create a virtual prototype is with a pen and paper. Sketch out what the product will look like, including its core features, functionality, and potential materials. You could also use visual prototyping software like Figma or Vectr, though these have steeper learning curves.

Next, it’s time to develop a physical version of your product prototype. There are three ways to do this.

Gather raw materials needed to make the product and build the prototype yourself. This can be done with inexpensive materials like paper, cardboard, or plastic.

Find a prototyping supplier or manufacturer

Find professional prototype makers if you’d prefer not to go the DIY route.

If you’re producing gym leggings, for example, find a seamstress to create the prototype. It takes the pressure off a DIY prototype and allows you to lean on the expertise of established companies who go through the prototype development process regularly.

Pros of outsourcing a prototype:

Cons of outsourcing a prototype:

Arguably, the hardest part of outsourcing the prototyping process is finding the right manufacturer. Tim Ferriss advises, “Visit a trade show dedicated to the industry you’re considering getting into, because you will see all of the most reputable distributors and manufacturers at that single event.

“Once you’ve found a number of manufacturers, put out a proposal to all of them, and let them know you’re putting out multiple proposals. Chances are, you’re not going to impress them if you have a limited budget to put into a first manufacturing run.”

Use a 3D printer to make a physical version of your virtual design. It’s a rapid prototyping process that uses cheap materials—such as plastic, rubber, or nylon—to create visual versions of your invention.

Whichever route you choose to manufacture your first prototype, Charlotte Dickinson, founder of Minus Eyewear, advises, “Use the exact materials that your product will be made in. This will bring to light any unforeseen issues.

“For example, our first sample prototypes were made of an acetate which had a slightly different formula. When some of our pattern details were milled into our actual acetate material, it was a little bit more brittle which created tiny imperfections and consistency issues.”

The added benefit to this is it makes your pricing strategy easier to determine. Based on the prototyping cost, how much will it cost to make the final product? What can you resell for? Do the profit margins make sense?

Use Shopify’s free profit margin calculator to make sure you’ll have money left after manufacturing costs are taken into account. You are in business to make money, after all. 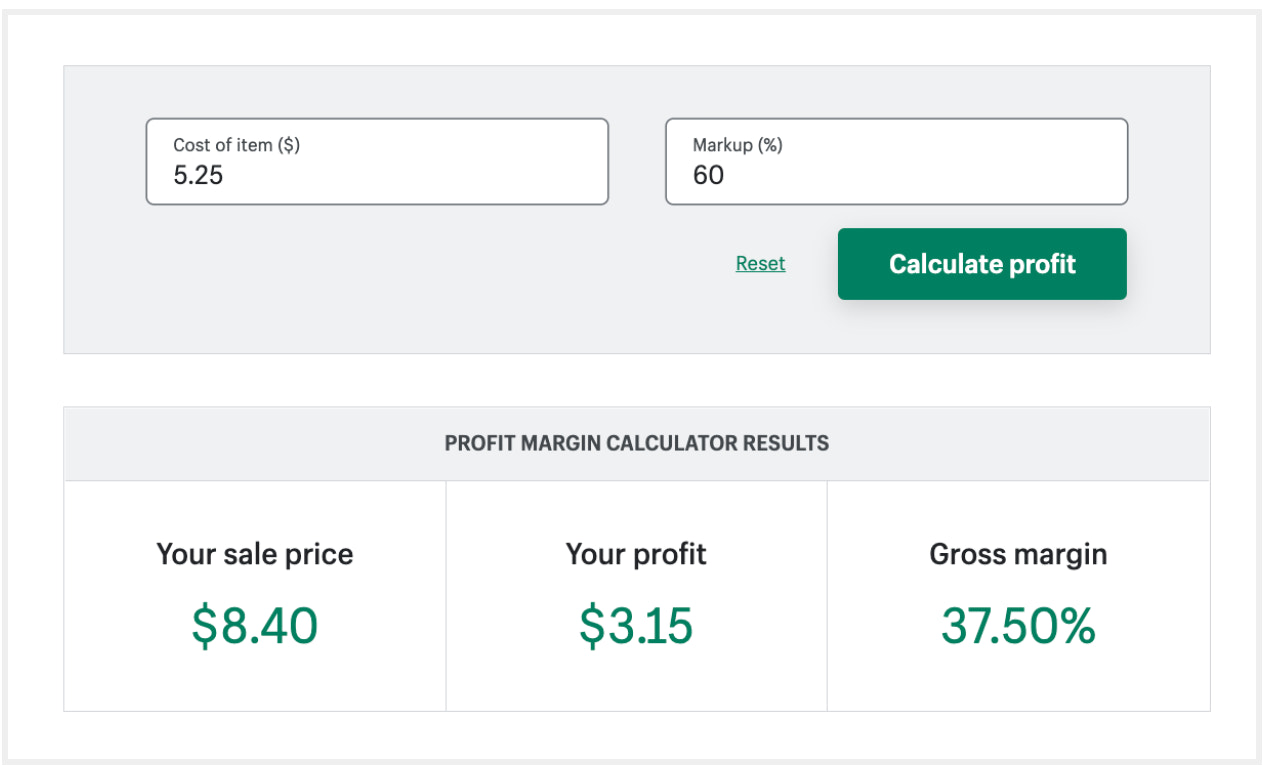 Make sure you’re left with some profit after subtracting manufacturing costs from your sale price.

Tim Ferriss adds, “If you’re going to prototype through a manufacturer, order a small batch. I would just emphasize the point that you should not get seduced by per unit costs.

“Just because you’ll save $1 per unit if you do 1,000 instead of 100, until you know for a fact that you can build the demand, or find demand, and fill that demand, acquire customers profitably—all of that you should only manufacture in small batches.

“If you end up with a lot of inventory you can’t clear out and you have to pay invoices net 30, you can go out of business really fast. You have to be smart at cash flow.”

Tim continues, “If you end wanting to tweak the product, which will almost always happen, you realize there’s a defect, customers don’t like feature A, B, or C, or you left something off the label, you need to know or have the ability to pivot and change the product without having to throw out 1,000 units.”

Once you’ve got your first prototype built, quiz your target market for feedback.

Family and friends are likely to say they would buy your prototype because they don’t want to hurt your feelings. Plus, if they’re not the type of person who’d get value from the end product, asking them for feedback on a prototype won’t allow you to uncover issues your ideal customer would.

Identify your target market by:

Ask whether they’d buy the product, what they’d change, how they’d improve it, and how much they’d pay. Use their answers to refine your next prototype.

Varun Sharma, co-founder and CMO of Laumière Gourmet Fruits, says, “I believe all feedback you get should be taken with a pinch of salt and analyzed on the impact across the entire customer base. Once we were able to channel feedback better, the process itself got easier.

“People truly enjoy being asked for their feedback. It helps build a strong relationship with them and they provide feedback that makes the prototyping process so much easier.”

6. Test and refine your prototype

Take the feedback you’ve already gathered and pair it with rigorous testing of your prototype.

Myriam Leblanc, founder of Bloire, says, “I think what can be discouraging for people who have never developed products is the number of iterations and samples you need to get through to create a good product.

“Even for something as simple as a cat toy, I had to make almost 50 designs before I ended up mass-producing seven toys. You must keep your eye on the goal and focus on the key elements you want your product to have. Your first prototype will probably not have the 50 functions you’d like and deciding when to take away a function can be hard-braking. It can be a hard process, but you must stick with it.”

Instead of using the product for 15 minutes and concluding the test, give a working prototype to your target market to test in real life. Incorporate their feedback into the next version.

Let’s put that into practice and say you’re giving your target market an early prototype of your anti-fraud wallets. Testers say the wallet achieves the goal of preventing fraudsters from cloning their contactless cards, but another issue cropped up: the wallet was too big to fit in a women’s standard-sized purse.

Go back to the drawing board and create another basic prototype. Can you re-run the manufacturing process to make a smaller wallet without compromising on its functionality?

Not every new product needs to be perfect before you start selling. Once your prototype makes the MVP stage, create an online store and start selling to the general public to get early adopters. It’ll act as the final seal of validation before investing in mass production.

Choose an ecommerce platform like Shopify, create an online storefront, and start promoting your products. You might not get hundreds of sales overnight, but a few orders can quickly validate your idea.

As Varun Sharma, co-founder and CMO of Laumière Gourmet Fruits, summarizes, “If you’ve waited to perfect your product before shipping out the first physical product, you’re doing it wrong. Put out what you have to share. Get feedback fast and continue to iterate till your product gets better.”

The prototyping process can be long and expensive, but it saves you time and money in the long run. The most important thing? If you’re working with third-party prototype makers, confirm your intellectual property is legally protected.

Don’t stop once you’ve made the first prototype. Gather feedback from your target market and validate your product idea before investing in mass production. Launch this MVP through your online store to start making money from your invention.

How much does it cost to get a prototype made?

Prototype costs are often higher than full-scale production because you don’t benefit from high volume discounts. The cheapest method is to build basic prototypes yourself. That way, you’ll only have to pay for raw materials.

Who can help me create a prototype?

What is the purpose of a prototype?

Prototyping happens at the start of the product development process. Its purpose is to iron out any issues you might have in full-scale production, which saves time and money in the long term.