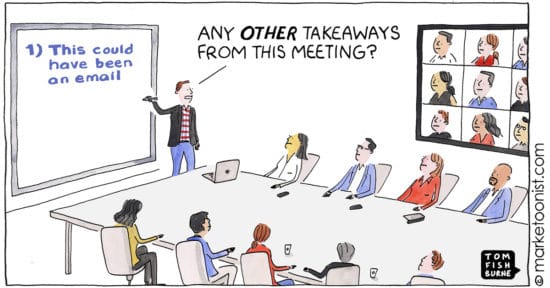 Meetings have always been a favorite punching bag of modern work life.  One survey in 2014 found that employees rated meetings as the “number one office productivity killer.”

Hubspot just released their 2022 Hybrid Work Report and found that 70% of a hybrid workforce said that too many calls and meetings are disruptive to their concentration.  And 58% of employees reported that at least half of the meetings they joined could have been emails instead.

With hybrid work, there’s a greater need than ever for communication, but “more communication” as the answer is taking a toll.

Much of the focus on addressing meeting fatigue so far has been on introducing new tools and technology.  But as with many changes related to the amorphous term of “digital transformation”, technology is only part of the equation.  The trickier stumbling block is cultural.

Matt Mullenweg runs Automattic (maker of WordPress), a company with 1,792 employees in 75 countries and no office.  They’ve been on the leading edge of distributed work.  Matt gave an interview with Sam Harris in 2020 on the five levels of autonomous work, which I think is an interesting way to think about the future of work, a shift from synchronous to asynchronous communications, and the role of meetings:

Level Zero: “a job which cannot be done unless you’re physically there”
Level One: “no deliberate effort to make things remote-friendly”
Level Two: “everything is still synchronous, your day is full of interruptions”
Level Three: “being remote-first, or distributed”
Level Four: “where things go truly asynchronous”
Level Five: “consistently perform better than any in-person organization could”

In early 2020, many organizations were forced to shift from Level One to Level Two.  Some have shifted to Level Three.  But it’s harder to make the shift to Level Four, let alone Level Five.

In one large-scale experiment, Salesforce recently tried canceling all meetings for 23,000 employees for one week.  They called it “async week,” an attempt to work in a more asynchronous way.  At the end of the week, 81% of employees reported they wanted more async weeks, at least quarterly.

But only 18% said they strongly agreed that the meeting-free work would “change their behavior toward meetings” and only one in eight identified a meeting they could “permanently cancel or stop attending.”

Looks like meetings as a cartoon topic will continue!

Here are a few related cartoons I’ve drawn over the years:

“If marketing kept a diary, this would be it.”

Seven Google alerts SEOs need to stay on top of everything!

10 Blog Examples for Your Inspiration