Creative Intelligence And Its Role In Online Advertising [Podcast]

AI and the Future of Design: Is There Still a Future in Graphic Design?

How To Write Great SEO Titles

How To Plan A Blog Post In 6 Easy Steps

How to Define Your Customer Avatar (and Sell More to Them) 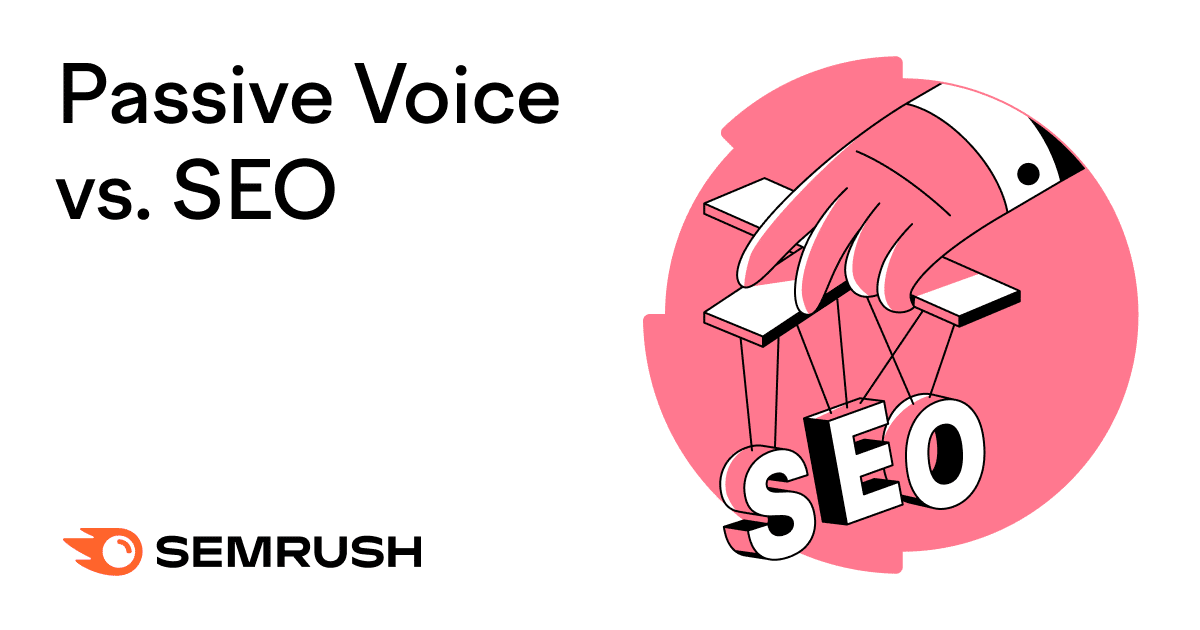 If you’re optimizing your content to achieve higher positions in the search engine results pages (SERPs), you’ll probably have heard it’s best to write in the active voice. The theory goes that passive constructions are more complex and therefore more difficult to read, which might in turn count against your content in terms of SEO.

Unfortunately, the passive voice is a staple of technical and scientific writing. It’s often hard to avoid when working in a B2B sector, like marketing, IT, SaaS or Software Engineering, especially when content briefs come from technical departments.

This guide will explore these questions and look further at a number of expert opinions on how to create high quality content.

A Quick Primer on the Passive Voice and Active Voice

Unless you’re fresh out of AP English, you’ll be forgiven for not remembering what the passive voice is and what it’s used for, so here’s a quick refresher. Skip straight to the next section if you’re already familiar with it.

The English language has a subject-verb-object (SVO) sentence structure. This means, in most sentences, you’ll find a subject which performs the action, a verb that describes what the action is, and an object that is affected by the action.

Here is an example of a regular sentence in the active voice. In this example, it appears important that we know who performs the action

In the passive voice construction, we invert the sentences. We artificially make the receiver of the action the subject of the sentence.

In each example below, we have the outcome, the verb to be in different forms (is, are, was, were, has or had been), and a past participle. If we want to know who did the action, we add “by PERSON/ENTITY”):

We often see the passive voice in technical briefs and writing. This can be a huge headache for writers who need to create engaging copy and blogs and content managers who want to make them more readable. But does use of the passive voice really affect ranking?

Sergei Rogulin, SEO Manager at Semrush, explains the issue is not black and white.

It’s difficult to give a definite answer. Passive and active voices are not directly a ranking factor, but the passive voice increases the complexity of texts, while active voice is better for text perception. It therefore improves readability.

But we have to remember that it’s not just humans reading our websites.

“The voice can also indirectly affect how Google understands what your page is about. The higher readability is, the higher are the chances that the content will be correctly interpreted, which will improve the behavioral ranking factors,” he continues. “And that, in turn, may affect the growth in SERPs.”

Nevertheless, SEO is a complex field.

“One should not expect an immediate increase simply from the change of Passive to Active,” he says. “The most important thing is how useful your content is for users who find your page in search results.”

Google, or any other search engine for that matter, rewards websites that accurately answer the searcher’s question. It’s that simple (and it has always been).

Amit draws on the Google Webmaster Guidelines, which references the quality of written content in different places, stating:

“Readability is defined as the ease with which your target users can digest your content,” continues Amit. “For example, ‘The content writer typed an article’ is much clearer being an active passage compared to ‘The article was typed by the content writer’, a passive passage.”

Amit recommends using the passive sentences only when necessary to avoid any impact on ranking. “The websites that do it with the highest degree of readability tend to rank higher in SERPs,” he says.

When Is It Okay to Use the Passive Voice?

Both the active voice and passive voice have their functions—and there are definite times when it’s more appropriate to use the passive voice, despite what SEO tools tell us. Here are some scenarios when you should use passive grammatical structures.

1. When you don’t know (or don’t need to know) who performs the action

This passive construction is appropriate because we don’t know who robbed the bank. Don’t tie yourself in knots trying to convert this sentence into the active voice—it will sound convoluted and it will be less clear what happened. For example:

The same goes for when you don’t need to know who performed the action:

This is a common feature of more technical writing, as the actor in the sentence is either too obvious to state, or completely irrelevant.

2. When the outcome is more important than who or what performed the action

If you need to emphasize the result of an action, rather than the person, entity or thing that caused it, it’s better to use the passive voice:

In this example, the alternative active voice construction gives too much emphasis to the fire. This makes it seem like a thinking or purposeful actor, making it read strangely:

3. When you want to keep the subject hidden

People are sneaky creatures and sometimes we want to avoid responsibility. Here’s a classic example:

Whenever you read or hear this, it’s a purposefully passive construction designed to hide the person who made the mistakes. The same might happen, say, if you were hungry and didn’t want to admit you ate the last slice of cake.

See? You’re off the hook all thanks to the passive voice.

Joking aside, these examples point to the fact that the passive voice is sometimes necessary. You can use it in your content without harming the clarity of the message.

When Is It Better to Use the Active Voice?

The active voice can be thought of as a “default” way of writing. We use it because it sounds more energetic and it clearly shows who did what and to whom very clearly. It’s a clear form of expression and it should be used wherever possible.

John Warner, Marketing & Content Executive at Click believes that it’s the best choice, but there’s no harm in mixing up your styles:

My prose style is my own. I write lengthy sentences, often with several clauses. I may even drift into passive voice once or twice over the course of an article.

“So far as I know, passive voice has not reduced the ability of my articles to rank. There are crimes against English more severe, and more common, than passivity.”

John says that though Google is likely able to detect passive voice, he would be surprised if it affected ranking.

“What passive voice will do, if used too often, is impact clarity. When publishing online, you are writing for humans and a series of algorithms (such as BERT and MUM and LaMDA),” he says. “Of these two audiences, humans are far more forgiving of natural language than any NLP model. Humans possess an innate grasp of the oddities, abstractions and innovations of both written and spoken language.”

He explains that while they are improving, NLP models are not as good as people when it comes to understanding language.

“This makes clarity important. A need for clarity makes passive voice important to avoid. Perhaps not for ranking, but certainly for ranking for the right keywords,” he says.

How to Write Effectively in the Active and Passive Voice

There are a number of tools and grammar checkers to use to optimize a blog post’s readability: Grammarly, Yoast, Hemingway, and Semrush Writing Assistant ( SWA) are all examples. As part of this they will identify passive voice constructions and sometimes show what percentage of your text is passive.

“All these tools have their pros and cons, but Grammarly can even help with alternative wording of the proposal, while the SWA compares readability to competitors for a specific keyword,” says Sergei Rogulin.

So, while the tools are helpful for flagging issues, it will ultimately be up to the writer or editor to judge. You’ll need to decide whether the tools are highlighting sections of text that are hard to understand, or if they are actually clear and readable.

Passive voice and SEO is like a toxic relationship which does no good, and it’s better to keep them separate.

In content management, our aim is to provide fresh, useful, readable and original content to our audience. “Stuffing keywords to chase the SERPs are the good old days; in today’s context, SEO is a whole new game whose rules are undergoing every-minute evolution,” he says.

This is my primary rule with copywriting. While I don’t think there are any specific studies that tie passive voice and rankings on SERPs, consensus has always been that you focus on readability first. My instinct is to always remove anything extraneous – redundant words, meandering narratives, long sentences, and confusing word orders.

Alina uses Semrush as an example, converting the header on the homepage to the passive voice:

“This is not to say that I completely avoid passive voice. As with anything in the world of SEO, go for it if it’s user-first and search-friendly. ‘Semrush is trusted by the world’s leading companies’—while this sentence is in passive voice, it’s not uncommon for companies to use a similar syntax in their social proof modules,” she says.

How Can You Transform the Passive Voice to the Active Voice?

“The ball was kicked by Dave.”

We are in some dangerous territory now: That sentence is passive and it’s not doing anything for readability. It’s an inappropriate use of the passive voice and the SWA has told you so. But what can we do to fix it?

Here are some other comparisons:

If there’s one thing most content marketers can agree on, it’s that we want to create awesome, practical and informative content for our audience. At the same time, we’d like that content to rank in the SERPs.

A big part of that is ensuring our content is readable. While tools like Hemingway, Grammarly, Yoast and our own SWA have their place, nothing beats a great writer and a human editor when it comes to deciding whether or not to use the active or passive voice.

20 Best Facebook Posts to Get Likes Every Time (examples included)